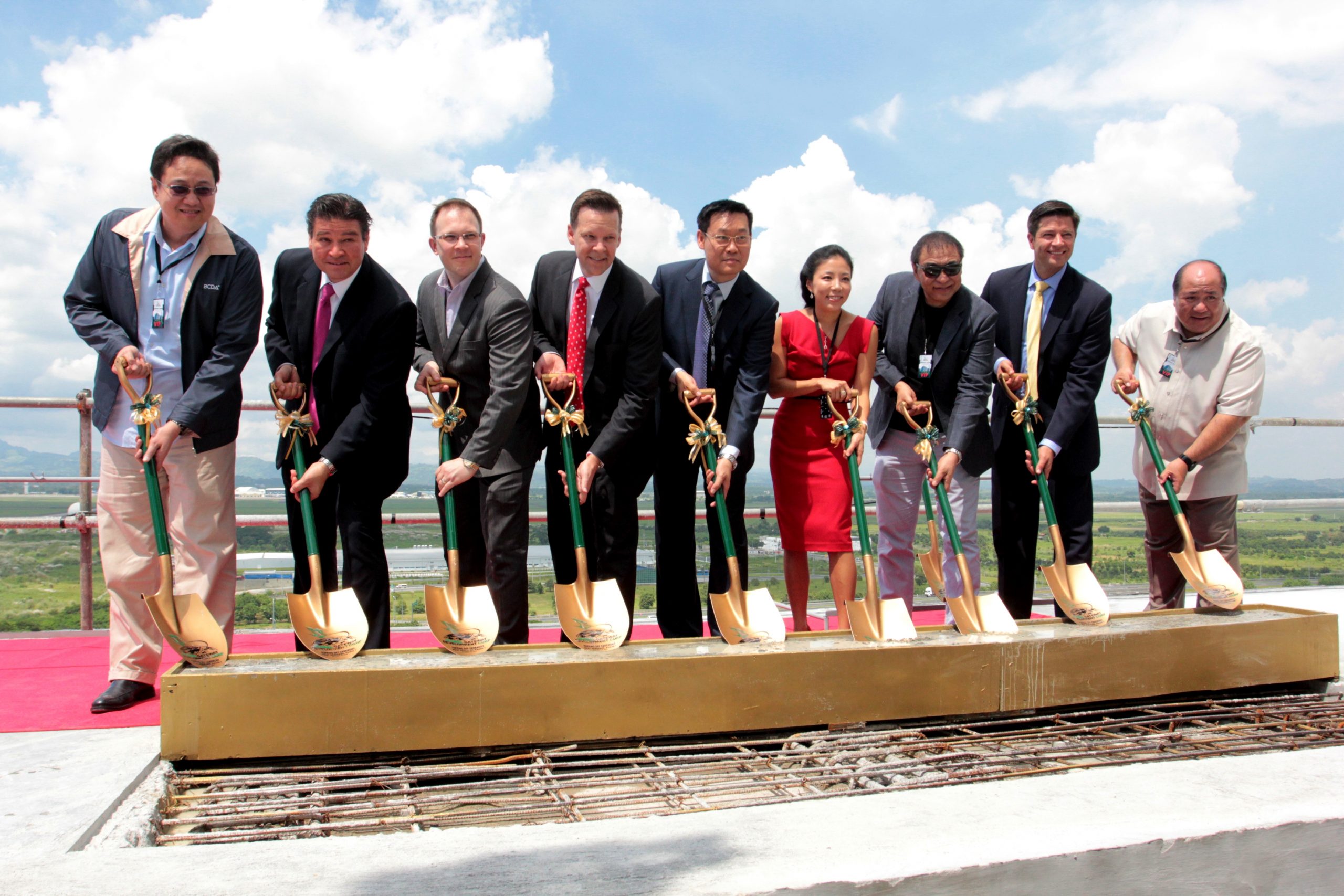 Mark Williams, GGDC Chief Executive Officer, led on October 18 the topping-off ceremony for the One West and Two West Office buildings which represent the first phase of the multi-million dollar Aeropark Campus in the 177-hectare GGLC in Clark.

“With the addition of new, high-quality office space ideal as an IT/BPO and logistics hub, the Aeropark Campus located in a well-designed, master planned precinct within the GGLC and directly adjacent to the Clark International Airport, we foresee the Clark Freeport Zone emerging as a new office and logistics hub for the Philippines,” Williams said.

Williams said the two new buildings are LEED or Leadership in Energy and Environmental Design — international green building rating system — pre-certified Gold, with a target to become platinum, as they were constructed to international green standards.

The five office buildings of the Aeropark Campus will be interconnected by walkways at the second floor, allowing for traffic-free pedestrian movement. Each building in the campus will have two floors of retail space meant to service inhabitants of the new city.

A part of the GGLC, the Aeropark Campus will have 5.8 million square meters of floor space, once it is fully developed.

“At full buildout, the City will create over 300,000 jobs translating to over US$600 million in annual payroll,” Williams said.

Williams said the GGDC team, partnering with the best consultants and the greatest minds in the industry, embarked on a journey to construct and develop a premier and choice IT/BPO and logistics hub in the Clark Freeport Zone.

“Our team tirelessly studied, planned, and engineered to construct a structure that meet the highest international standards and would be a game changer in the Clark Freeport zone and the Philippines. Eleven months after we first broke ground, the first two of five buildings of the Aeropark Office Campus Quad 1 are now structurally complete,” the GGDC CEO pointed out.

Williams led the topping-off ceremony, that is involves the pouring of concrete on the top of a building to complete its construction, along with GGDC officials that include, among others, GGDC President Michael Russell and Director Evan McBride; as well as officials of the Clark International Airport Corporation (CIAC) led by Officer-in-Charge and Acting President and CEO Alexander Cauguiran; Clark Development Corporation (CDC) officials led by Officer-in-Charge Noel Manankil; and business leaders and representatives of global investment companies that are partners of GGDC in the development of the Aeropark.

Williams said the topping-off ceremony manifests GGDC’s commitment to the full development of GGLC, which is envisioned to become the most modern city in Southeast Asia.

GGDC plans to transform GGLC into a state-of-the-art commercial and logistics aerotropolis built to the highest environment standards. GGDC has a lease on the property for a period of 50 years, with an option to renew for 25 years.

GGDC was originally founded by The Port Fund, a private equity fund managed by the Kuwait firm KGL Investment Company (KGLI) whose investors largely consist of the shareholders of government entities of Kuwait and other Gulf Cooperation Council (GCC) countries.

The GGLC is a state-of-the-art, master-planned, mixed-use Logistics and Business Center of Excellence. The first aerotropolis in the Philippines, GGLC is located at the crossroads of Southeast Asia in the central plains of Luzon, just 90 minutes north of Manila, inside the Clark Freeport Zone.

GGLC sits at the Subic-Clark-Tarlac Expressway interchange, adjacent to the country’s largest aviation gateway the Clark International Airport and offers the perfect blend of prime real estate and modern facilities for all business needs.

The GGLC is divided into four zones: the Logistics Park catering to warehousing, distribution and light manufacturing operations; the Business Park for office requirements; the Aeropark that is home to research and development, modeling and simulation, IT and centers of higher learning; and, the Town Center to support retail and shopping needs. (JOJO C. DUE)