CLARK FREEPORT (CIAC-CCO, February 23)—The construction of the country’s airport control tower and the upgrading of the airfield’s ground lighting system at the emerging Clark airport complex have finally started, an executive of the government-run Clark International Airport Corp. announced on 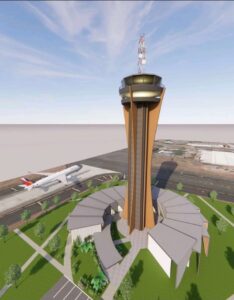 CIAC president Aaron Aquino said the air control tower project and the upgrading of the airfield ground lighting system are expected to improve Clark’s air traffic control system as the new passenger terminal building of the Clark International Airport is expected to be fully operational within the year.

“The airfield tower and lighting projects are in conformity with the Master Plan of the Clark airport and are expected to be completed by December 2021,” Aquino added.

“The airport control tower will be 18-storeys high or about 54 meters, the tallest in the country, much higher than the existing one built by the Americans at this former Clark air force base,” Aquino said.

The projects are two major components of CIAC’s airport infrastructure expansion program whose funding was approved via the General Appropriations Act of 2020 under the account of the Bases Conversion and Development Authority, the CIAC’s parent company.

While the Clark airport is operated and maintained by a private company called LIPAD Corp., CIAC has refocused its operations to further develop the 2,367-hectare Clark Civil Aviation Complex to become a globally-competitive services and logistics hub.