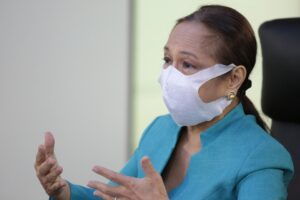 “When you do a masterplan, maybe you can think of how that service and logistics center vision can be promoted operationally.  It is an exciting challenge because there’s something that you’re

going to do to make the Clark airport area really different from the rest of the country,” Arroyo told CIAC President Aaron Aquino during an executive briefing at Clark held late last week.

The former president urged the agency to start working on plans to further develop the government-owned prime land surrounding the Clark International Airport as service centers of airlines, for logistics and warehouses, and transport hubs.

“We are honored by the

specific paradigm shift advice by Madame PGMA as it is consistent with our mandate to develop and attain a world-class civil aviation complex inside Clark,” Aquino said.

CIAC is committed to develop a niche for service industries and logistics centers as advised by former President Arroyo, he added.

The CIAC chief’s first directive was to immediately tap around 277 has. of underutilized land at the Clark civil aviation complex for commercial use in the next two to three years.

“CIAC shares the same direction envisioned by both President Duterte and President Arroyo, to forge several strategic partnerships for landside business development projects that will readily create revenue sources for the national government,” he added.

The aviation complex managed by CIAC is host to FedEx Express, a subsidiary of the world’s leading logistics company FedEx Corp., which will start commercial operations in April 2021.