The year 2016 was welcomed with much joy, aspiration and gratitude as the Clark International Airport Corporation (CIAC) received from the Department of Transportation on 21 January 2016 during the 117th Anniversary of CIAC’s mother agency the Gender and Development (GAD) Award of Recognition for CIAC’s continuous determination, contribution and sincerity towards the attainment of a gender-responsive air transport system through the inclusion of gender perspective in relevant activities and strategies in its corporate social responsibility (CSR) which play a dynamic role in achieving acceptable work conditions to their employees and help a better quality of life for the community. It is worthy to note that CIAC was the sole awardee for the year’s awarding event. 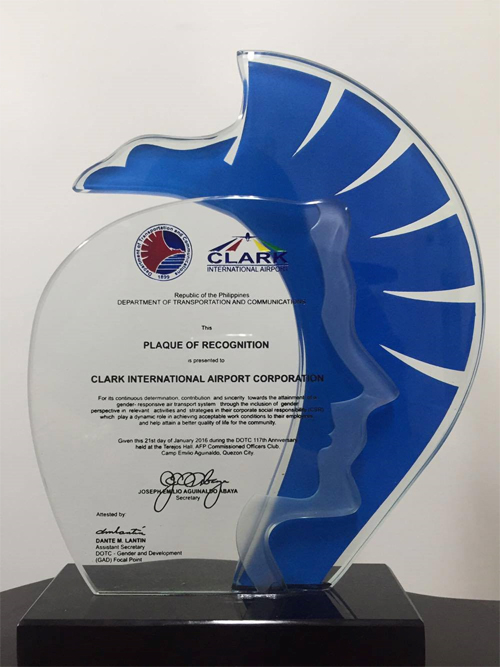 CSR activities undertaken, both client-focused as well as organization-focused, include the following:

AMMA Program:
A Sustained Community-Based Intervention
for Husbands and Children Left Behind by
OFW-Mothers

Various programs have continued to be carried out to make the communities feel the impact of the Clark Airport in terms of their socio-economic development. The Ama Na Magaling Mag-Aruga sa Anak (AMMA), a community-based intervention for the husbands and children left behind by OFW-mothers, ran its Phase IV which focused on Organizational Management and Development (intermediate). It will be recalled that the AMMA started as a psychosocial program in partnership with the MLAC Institute for Psychosocial Services and the local government of Mabalacat City designed to address the social costs of feminization of migration. After the transformation experienced by the fathers from previously having felt low-esteem for the househusband role that they have assumed when the wife started working abroad, the program has processed their issues helping them gain solid self-worth, realizing the value of their role to their families, perceiving and describing themselves now with renewed pride and honor as “Ang haligi ay ilaw na rin.” Part of the Phase IV task aimed towards sustainability is helping them achieve their aspiration for their group which is to become a duly recognized organization. CIAC has facilitated their registration and accreditation with the Department of Labor and Employment (DOLE) as a workers’ association with the name AMMA Para sa OFW. Former Chairperson of the Philippine Commission on Women applauded such action of helping husband-home caretakers become recognized as workers to emphasize the fact that home management, even though is not paid work, is first and foremost, work and a fundamental work at that upon which the commodity economy as well as the public service economy heavily rely by supplying human resources and maintaining the social framework. In honoring fathers during the Fathers’ Day celebrated in June 2016, the Philippine Daily Inquirer featured the AMMA fathers. The Community Relations of CIAC has also engaged them in advocacy work giving way to their participation in the Parenting Academy held at the St. Luke’s Global City Auditorium in the presence of parents, faculty and counselors from premier universities in the country.

We also try to help these indigenous people become conscious of their health. Medical mission activities were done for the Aetas from Sitio Haduan of Mabalacat in partnership with the Philippine Air Force and the health unit of Mabalacat. Another medical mission was done with another group of Aetas from Sitio Babo of Sapang Bato, Angeles City with the assistance of the medical team of the local government of Angeles City. 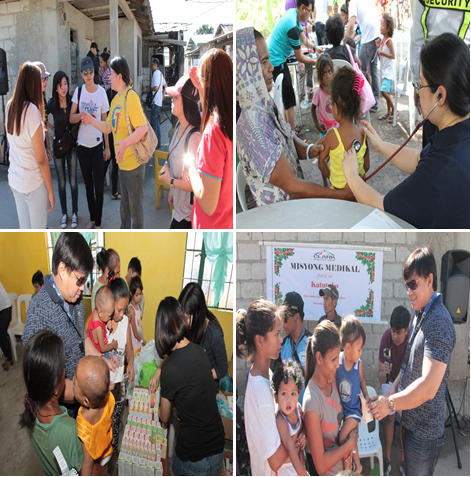 In sustaining gender sensitive facilities and services at the Passenger Terminal Building, we facilitated the provision of a family room with diaper changing area and nursing area. An LGBT-friendly restroom at the passenger terminal building was also put in place. The TUV Rheinland’s Audit Report for Re-Certification of CIAC cited the provision of the LGBT-friendly comfort room as a positive finding. 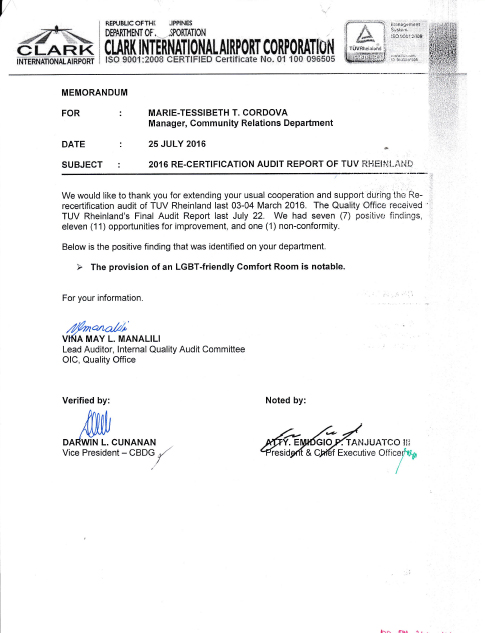 CIAC extends its support to visually impaired women and men. Last August 2016, a Memorandum of Agreement (MOA) was signed with the Visually Impaired Licensed Massage Therapists of the Philippines (VILMTAP) to provide them work opportunities. They are now doing massage services to passengers occupying a space at the airport terminal free of rental fees. 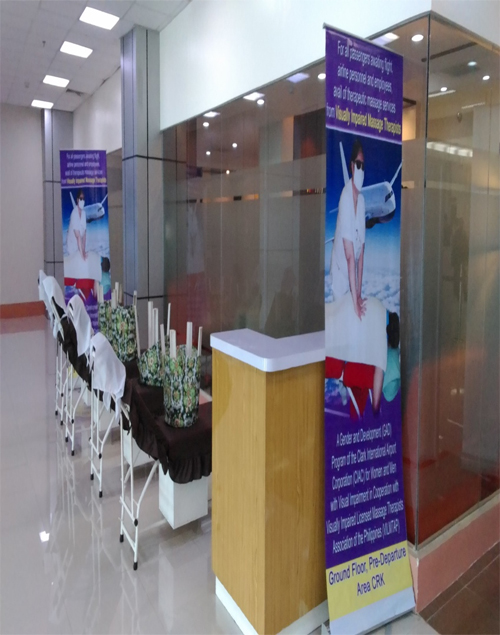 Employee Internalization and Advocacy of Gender and Development

For programs meant to address gender issues relating to members of the organization, women-employees were given a respite from work and given the time and space to take of themselves last March in celebration of the National Women’s Month. Trekking the heights of Mt. Pinatubo was part of the activities done. 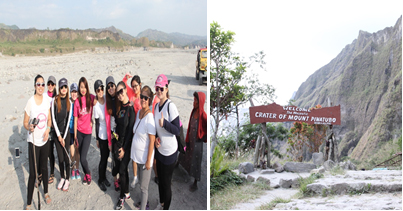 Moreover, the CIAC Child Care Center was installed to promote gender equality in childcare by lessening burn-out of mother and father-employees. The Childcare Center was opened to cater to 3 to 4-aged children of employees by involving the kids in activities aimed to provide opportunities for their holistic development that allow them to freely express their thoughts and expand their sense of imagination, creativity and mastery of themselves and of their environment. By April 2016, the program successfully had its 1st Moving up Ceremony for its first batch of kids .